In the last lecture we saw that under \(q^*\) linear realizability, query-efficient fixed-horizon local planning with a constant suboptimality gap is intractable provided that there is no limit on the number of actions. In particular, the MDPs that were used to show intractability use $e^{\Theta(d)}$ actions, where $d$ is the dimension of the feature-map that realizes the optimal action-value function. At the end of the lecture, we also noted that intractabality also holds for undiscounted infinite horizon problems under \(v^*\) linear realizability in the regime when the number of actions scales linearly with $d$. In this lecture we further dissect \(v^*\) realizability, but return to the fixed horizon setting and we will consider the case when the number of actions is fixed. As it turns out, in this case, query-efficient local planning is possible.

Before giving the details of this result, we need to firm up some and refine other definitions. First, \(v^*\) realizability under a feature map \(\phi=(\phi_h)_{0\le h \le H-1}\) in the $H$-horizon setting means that

where \(v^*_h\) is the optimal-value function when \(H-h\) steps are left (in particular, \(v^*_H=\boldsymbol{0}\)). Again, this uses the indexing introduced in the previous lecture. In what follows, without the loss of generality we assume that the feature map is such that all the feature-vectors lie within the a ($2$-norm) ball of radius one. When realizability holds with a parameter vector bounded in $2$-norm by $B$, we say that \(v^*\) is $B$-realizable under the feature map $\phi$.

We also slightly modify the interaction protocol between the planner and the simulator, as shown on the figure below. The main new features are introducing stages, and restricting the planners to access states and features only through local calls to the simulator. 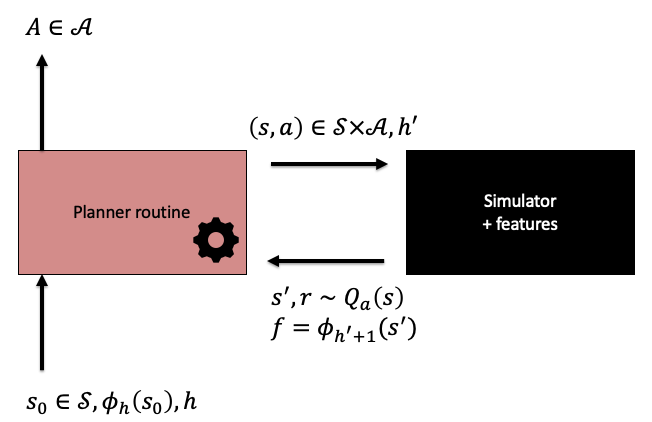 Illustration of the interaction protocol between the planner and the simulator.

In this setting a \(\delta\)-sound planner is one which, under the above protocol, induces a policy of the MDP whose simulator it interacts with which is at most \(\delta\)-suboptimal.

Theorem (query-efficient planning under \(v^*\)-realizability): For any integers $A,H>0$ and reals $B,\delta>0$, there exists a local planner $\mathcal{P}$ with the following properties:

Note that for $A>0$ fixed the query-cost is polynomial in $d,H,1/\delta$ and $B$. It remains to be seen whether this bound can be improved. However, this is somewhat of a theoretical question as under \(v^*\)-realizability, even if the coefficients $\theta\in \mathbb{R}^d$ that realize \(v^*\) are known, in the lack of extra information, one needs to perform \(\Theta(A)\) simulation calls to be able to get good approximations to the action-value function \(q^*\), which seems necessary for inducing a good policy. Hence, the query cost must scale at least linearly with \(A\), hence, no algorithm is expected to be even query-efficient when the number of actions is large.

The planner that is referred to in the previous theorem is called TensorPlan. The reason for this name will become clear after we describe the algorithm.

TensorPlan belongs to the class of optimistic algorithms. Since knowing \(\theta^*\), the parameter vector that realizes \(v^*\), would be sufficient for acting near-optimally, the algorithm aims to find a good approximation to this vector.

A suitable estimate is constructed in a two-step process:

where, for convenience, we introduce \(v_h(s;\theta) = \phi_h(s)^\top \theta\). When $\theta^+$ is close enough to \(\theta^*\), one hopes that the policy induced by \(\theta^+\) will be near-optimal. Hence, the approach is to “roll out” with the induced policy (using the simulator) and verify whether during the rollout the data received is consistent with the Bellman equation, and as a result of this, also whether the episode return observed is close to \(v_0(s_0;\theta^+)\). When a contradiction to any of these is detected, the data can be used to shrink the set \(\Theta\) of consistent parameter vectors.

The approach described leaves open the question of what we mean by a policy “induced” by \(\theta^+\). The naive approach is to base this on the Bellman optimality equation, which states that

While this may approach work, it is not easy to see whether it does. (It is open problem whether this works!) TensorPlan defines induced policies and consistency slightly differently. The changed definition allows not only for proving that TensorPlan is query-efficient, but it even makes the guarantees for TensorPlan stronger than what was announced above in the theorem.

What makes the analysis of the algorithm that is based on the Bellmean optimality equation difficult is the presence of the maximum in this equation. Hence, TensorPlan removes this maximum. Accordingly, the policy induced by $\theta^+$ is defined as any policy $\pi_{\theta^+}$ which in state $s$ and stage $h$ chooses any action $a\in \mathcal{A}$ which ensures that

If there is no such action, \(\pi_{\theta}\) is free to choose any action. We say that local consistency holds at $(s,h,\theta^+)$ when there exists an action $a\in \mathcal{A}$ such that \eqref{eq:tpcons} holds.

The advantage of the relaxed notion of induced policy is that with this choice, TensorPlan will also be able to compete with any deterministic policy whose value-function is realizable. This expands the scope of TensorPlan: Perhaps the optimal value function is not realizable with the features handed to TensorPlan, but if there is any deterministic policy whose value-function is realizable with them, then TensorPlan will be guaranteed to produce almost as much as reward as that policy. In fact, it will produce nearly as much reward as the policy that achieves the best value.

To summarize, after generating a hypothesis \(\theta^+\), TensorPlan will run a number of rollouts using the simulator so that for each state $s$ encountered TensorPlan first finds an action $a$ satisfying \eqref{eq:tpcons}. If this succeeds, the rollout continues by TensorPlan getting a next state from the simulator at $(s,a,h)$ and $h$ is incremented. This continues up to $h=H$, which ends a rollout. TensorPlan will run \(m\) rollouts of this type and if all of them succeeds, TensorPlan stops and will use the parameter vector \(\theta^+\) in the rest of the episode and the same policy \(\pi_{\theta^+}\) as used during the rollouts. If during the rollouts an inconsistency is detected, TensorPlan will decrease the hypothesis set \(\Theta\) and continue with a next experiment.

It remains to be seen why TensorPlan (1) stops with a bounded number of queries and (2) why it is sound.

We start with boundedness. This is where the change of how policies are induced by parameters is used in a critical manner. Introduce the discriminants:

Note that \(\Delta(s,a,h,\theta)\) is just the difference between the right-hand and the left-hand side of \eqref{eq:tpcons}, where we plugged in the definition $v_h$ and $v_{h+1}$ and we define

The reason this purely algebraic reformulation of local consistency is helpful is because the product of the discriminants can be see as a linear function of the $A$-fold tensor product of \((1,\theta^\top)^\top\).

To see why this holds, it will be useful to introduce some extra notation: For a real $r$ and a finite-dimensional vector $u$, we will denote by \(\overline{ r u}\) the vector \((r,u^\top)^\top\) (i.e., adding $r$ to the first position and shifting down all other entries in $u$). With this notation, we can write the discriminants as an inner product:

Now, recall that the tensor product \(\otimes\) of vectors satisfies the following property:

where the inner product between two tensors is defined in the usual way, by overlaying them and then taking the sum of the products of the entries that are on the top of each other.

Based on this identity, we see that \eqref{eq:diprod}, and thus local consistency, is equivalent to

It remains to be seen that TensorPlan is sound. Let \(\theta^+\) be the parameter vector that TensorPlan generated when it stops. This means that during the \(m\) rollouts, TensorPlan did not detect any inconsistencies.

We now argue that this implies soundness.

Hence, when TensorPlan stops with parameter \(\theta^+\), with high probability,

So far we have seen that if somehow TensorPlan would be able to get \(\Delta(s,a,h,\theta)\) with no errors, (1) it would stop after refining its hypothesis set at most \(k\) times and (2) when it stops, with high probability it would return with a parameter vector that induces a policy with high value. Regarding the number of queries used, if obtaining \(\Delta(s,a,h,\theta)\) is counted as a single query, TensorPlan would need at most \(maH k =maH (d+1)^A\) queries (\(m\) rollouts, for each of the \(H\) states in the rollout, \(A\) queries are needed).

It remains to be seen how to adjust this argument to the case when \(\Delta(s,a,h,\theta)\) need to be estimated based on interactions with a stochastic simulator.

This lecture is entirely based on the paper