The following lemma can be extracted from the calculations found at the
end of the last lecture:

In particular, the only restriction is on policy $\pi^*$ so far and that is that it has to be a memoryless policy. To control the suboptimality of the mixture policy, one just needs to control the action-value approximation errors \(\| q^{\pi_j}-\hat q_j\|_\infty\) and the term $T_1$ and for this we are free to choose the policies \(\pi_0,\dots,\pi_{k-1}\) in any way we want them to be chosen. To help with this choice, let us now inspect \(T_1(s)\) for a fixed state $s$:

As it happens, the problem of controlling terms of this type is the central problem studied in a subfield of learning theory, online learning. In particular, in online linear optimization, the following problem is studied:

Mirror descent (MD) is an algorithm that originates in optimization theory. In the context of online linear optimization, MD is a strategy for the learner which is known to guarantee near minimax regret for the learner under a wide range of circumstances.

To align with the large body of literature on online linear optimization, it will be beneficial to switch signs. Thus, in what follows we assume that the learner will aim at minimizing \(\langle x,y \rangle\) by its choice \(x\in \mathcal{X}\) and the adversary will aim at maximizing the same expression over its choice \(y\in \mathcal{Y}\). This means that we also redefine the regret to

Everything else remains the same: The game is zero-sum, minimax, the regret is the payoff for the adversary and the negative regret is the payoff of the learner. This version is called a loss-game. The reason to prefer the loss game is because most of optimization theory is written for minimizing convex functions rather than for maximizing concave functions. However, clearly, this is an arbitrary choice. The second form of the regret shows that the player’s goal is to compete with the best single decision from \(\mathcal{X}\) but chosen given the hindsight of knowing all the choices of the adversary. That is, the learner’s goal is to keep its cumulative loss \(\sum_{j=0}^{k-1} \langle x_j, y_j \rangle\) close to, or even below the best cumulative loss in hindsight, \(\min_{x\in \mathcal{X}} \sum_{j=0}^{k-1}\langle x,y_j \rangle\). (With this, $T_1(s)$ matches \(R_k\) when we change \(\mathcal{Y} = [-1/(1-\gamma),0]^{\mathrm{A}}\).)

MD is recursively defined and in its simplest form it has two design parameters. The first is an extended real-valued convex function \(F: \mathbb{R}^d \to \bar {\mathbb{R}}\), called the “regularizer”, while the second is a stepsize, or learning rate parameter $\eta>0$. (The extended reals is just \(\mathbb{R}\) together with \(+\infty,-\infty\) and an appropriate extension of basic arithmetic. By allowing convex functions to take the value \(+\infty\) allows to merge “constraints” with objectives in a seamless fashion. The value $-\infty$ is added because sometimes we have to work with negated extended real-valued convex functions.) 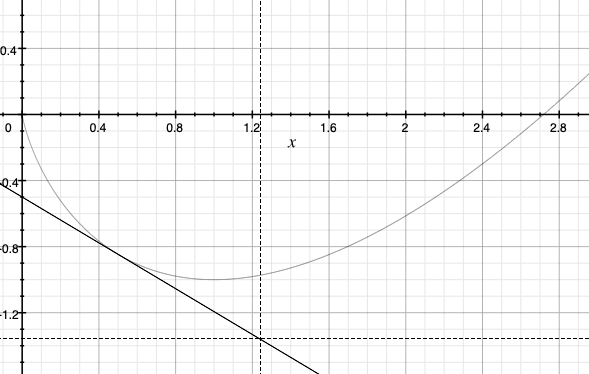 is the remainder term in the first-order Taylor-series expansion of the value of $F$ at $x$ when the expansion is carried out at \(x'\) and, for simplicity, we assume that \(F\) is differentiable on the interior of its domain \(\text{dom}(F) = \{ x\in \mathbb{R}\,:\, F(x)<+\infty \}\). Since for any convex function and any linear approximation of it stays below the graph of the convex function, we immediately get that \(D_F\) is nonnegative valued. For an illustration see the figure on the right, which shows a convex function, the first-order Taylor approximation of the function at some point.

In the definition of the MD update rule, we tacitly assumed that \(D_F(x,x_{j-1})\) is well-defined. This requires that \(F\) should be differentiable at \(x_{j-1}\), which one needs to check when applying MD. In our specific case, this will hold, again.

Where is the mirror?

Under some technical conditions on \(F\), the update rule \eqref{eq:mddef} has a two step-implementation:

The use of complex terminology, like “primal” and “dual” spaces, which happen to be the same old Euclidean space, \(\mathbb{R}^d\), probably sounds like an overkill. Indeed, in the simple case we consider when these spaces are identical it is. The distinction would become important when working with infinite dimensional spaces, which we leave to others for now.

Besides helping with understanding the terminology, the two-step update shown can also be useful for computation. In fact, this will be the case in the special case that we need.

Mirror descent on the simplex

We have seen that in the special case we need, 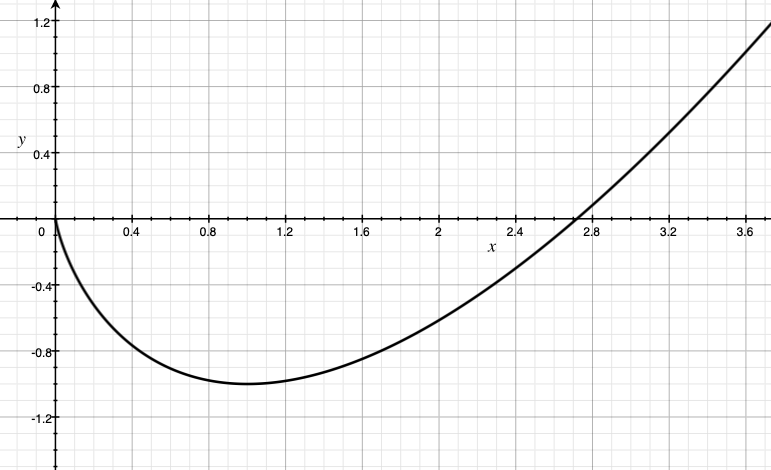 To use MD we need to specify the regularizer \(F\) and the learning rate. For the former, we choose

i.e., the matrix whose $(i,i)$th diagonal entry is \(1/x_i\). Clearly, this is a positive definite matrix, which suffices to verify that \(F\) is a convex function.

The Bregman divergence induced by \(F\) is

It is not hard to verify that $x_j$ can be obtained as shown in \eqref{eq:mds1}-\eqref{eq:mds2} and in particular this two-step update takes the form

Unrolling the recursion, we can also that this is the same as

Based on this, it is obvious that MD can be efficiently implemented with this choice of $F$. As far as the regret is concerned, the following theorem holds:

where the third equality used that $\langle x_j,\boldsymbol{1}\rangle = \langle x, \boldsymbol{1} \rangle = 1$. Taking the maximum over $x\in \mathcal{X}$ gives that

By the update rule in \eqref{eq:mdunrolled},

Note that the “shift” by $-jb$ cancels out in the normalization step. Hence, MD in this case takes the form

which is the same as before, except that the learning rate is scaled by $1/(b-a)$. In particular, in this case one can set

and use update rule \eqref{eq:mdunrolled}.

to be used with

Note that this is the update used by Politex. Then, \eqref{eq:mdrbscaled} gives that simultaneously for all $s\in \mathcal{S}$,

Putting things together, we get the following result:

Then, in $K$ iterations, Politex produces a mixed policy $\bar \pi_K$ such that with probability $1-\zeta$, the suboptimality gap $\delta$ of $\bar \pi_K$ satisfies

Note that as compared to the result of LSPI with G-optimal design, the amplification of the approximation error $\varepsilon$ is reduced by a factor of $1/(1-\gamma)$, as it was promised. The price is that now the number of iterations $K$, is a polynomial of $\frac{1}{(1-\gamma)\varepsilon’}$, whereas before it was logarithmic. This suggest that perhaps a higher learning rate can help initially to speed up convergence to get the best of both words.

where the first inequality uses that \(q_{\pi_k}\) takes values in $[0,1]$. On the event when the above inequalities hold, by \eqref{eq:polsubgapgen} and \eqref{eq:t1sbound},

The details of this calculation are left to the reader. \(\qquad \blacksquare\)

we get a definition that is used in the literature, which prefers the convex case to the concave. Here, the interpretation is that \(\tilde y_j\in \tilde {\mathcal{Y}}\) is a “loss function” chosen by the adversary in round \(j\).

Truncation or no truncation?

We introduced truncation to simplify the analysis. The proof can be made to go through even without it, with a mild increase of the suboptimality gap (or runtime). The advantage of removing the projection is that without projection, \(\hat q_0 + \dots + \hat q_{j-1} = \Phi (\hat \theta_0 + \dots + \hat \theta_{j-1})\), which leads to a practically significant reduction of the runtime.